George Gagnidze is back at the Gran Teatre del Liceu, where he performs his signature role of Scarpia in six performances of Tosca from January 8 to 21. Giacomo Sagripanti and Henrik Nánási are conducting and the production is by Rafael R. Villalobos. He shares the stage with Maria Agresta, Monica Zanettin and Emily Magee in the title role, Michael Fabiano and Antonio Corianò as Cavaradossi.

George Gagnidze comes fresh from performing Scarpia at the Metropolitan Opera, where he has sung the role more than 40 times. His performance at the Gran Teatre del Liceu marks his 100th outing in the role of the evil chief of police.


Amonasro in "Aida" at the Metropolitan Opera

On December 2, 6 and 10, 2022, George Gagnidze returns to the Metropolitan Opera as Amonasro in Aida. The legendary Sonja Frisell staging saw George making his role debut as Amonasro in 2012 and is being performed for the last time this season at the MET. Paolo Carignani conducts a cast which also includes Latonia Moore in the title role, Olesya Petrova as Amneris, Brian Jagde as Radamès, Christian Van Horn as Ramfis and Alexandros Stavrakakis as Il Re. 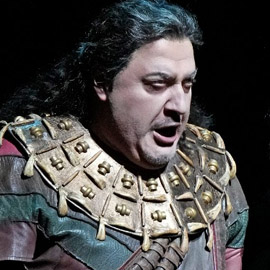